Having the food hygiene rating adds a lot to the listings of the restaurants, but these were a little lost without the date that they were checked – so, I’ve now added the date at which the Food Standards Agency checked the restaurant!

These are now displayed directly underneath the FSA logo showing the food rating.

Hovering over these images also gives a brief text-based description of what the Food Hygiene Rating image is showing, in addition to helping The Menu Pile website to be a little more accessible for those with visual impairments.

Even though this date is where the FSA have checked the restaurant, there’s another date that I think I’ll have to show on-screen, which is the date that The Menu Pile checks the FSA for our information.  We currently do this on a daily basis, meaning that any change in the food hygiene rating for any given restaurant will be reflected on our website within day of it changing on the Food Standards Agency website.

To be brutally honest, I don't think there is a secret sauce to all of this. The website is growing slowly, but surely, in terms of visitors each week, and the Facebook Page is getting there too.

I've scanned more documents in the past several weeks since starting The Menu Pile website, than I have in my entire life. I bought myself a new scanner a year or so ago, which makes the world of difference, as the buttons on the front panel makes it so much easier and faster to use than before.

Even though the scanner can produce scanned documents into PDF files directly, it doesn't allow me to modify the pages in the process. Instead, I scan the documents as high-resolution .JPG images, and then clean them up using Adobe Fireworks, to cut off the over-scans or to rotate some of the items, as I'd like.

Some of the menus are physically too large for the scanner, so I have to be creative with the scanning step, and then merge/stitch the documents back together again in Fireworks. Sounds like a lot of effort for a menu and sometimes it can be but the outcome is really good and is hard to tell where each image starts and ends.

The images are then set in a layout, and a PDF document is produced. At this point, the images are compressed and downscaled slightly, and then are then uploaded to the online server. The names of the files are recorded against the online database, which the website heavily uses, such that they appear in the front menu and are viewable.

I perhaps don't need to spend the crazy amounts of time that I currently spend on the menus, but the output files would be horrible if not. My opinion is that I would like to produce the files that *I* would like to see as a visitor to the website… I've been researching various restaurants that have their takeaway menu on their own website, and am disappointed that they've been thought as 'ok' to use. Some are ridiculously low-quality, which makes the file size very small but the downloading of them very fast, OR they're absolutely huge files but are so heavy on the bandwidth of mobile phone contracts, yet still poor quality.

Hopefully, I've found a middle ground - I want a higher-quality output file, but not too large, so when a user pinches-and-zooms to read the detail of the menu, they’re not disappointed with the blocky-ness of the graphics.

I haven’t had much feedback about the quality of the menus themselves – I’d hope that because they’re ‘ok’ that they’re received as such – but if not, I’d actually prefer someone to point out that a particular one is not so good, or if they’re all physically too large, etc.

This past weekend, I've been out to get some more places in 'the bag'. Friday evening, after getting the kids to bed, I set off for Huntingdon to try and get as many takeaway menus as I could.

I dotted around Warboys, Godmanchester and in/around Huntingdon itself, before returning home to process the findings.

The following evening, I set off to cover as much of Ely as I could handle. Starting off with Sutton and Witchford, then onto Haddenham and Soham, before finally making my way onto Ely. I admit, I had to sack-off Isleham and Littleport, as time was getting on. Another day maybe.

At the time of writing this, I have managed to scan-in the growing pile of menus, including the local menus that I've gathered newer replacement menus for. There's a little post-scanning to do before they magically appear on the website, namely upload the .PDF files and log them on the database.

In all honesty, I don't know how far I can go before I'm really going too far from home. Ely isn't a stones-throw away from Cambridge, and there's a whole lot of Cambridge out there.

I was just playing around with the Wordle.net website and wondered what it would be like to use the details of the restaurants in The Menu Pile’s database.

Word Clouds essentially take a list of words and then make the most frequent word used appear large. The bigger, the more frequent. The smaller, less so.

Here’s what I had back!

The first uses the individual words used in the names of all of the restaurants:

Or this one, based on the types of restaurants listed:

And here’s the names of the places that currently have menus on TheMenuPile.co.uk website:

For those of you that care, The Menu Pile is actually a well-engineered piece of work. 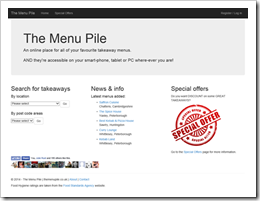 The whole thing is hosted up on Microsoft's Azure 'Cloud', and is elastically scalable at will, meaning that f thousands and thousands of people were to hammer the website all at the same time, the website (in theory) shouldn't fail.

It’s recently been upgraded to make use of an SSL certificate, too, meaning that the communications between your phone, tablet or computer make with our back-end servers are all done in an encrypted manner, for more peace of mind.

For those of you that don't care, essentially, the https://www.themenupile.co.uk website is online and that’s all that matters!

Email ThisBlogThis!Share to TwitterShare to FacebookShare to Pinterest
Labels: General

…as we drove home from somewhere and thought about collecting a Chinese takeaway en-route from our regular restaurant, The Chef Peking, in March.

We struggled to remember what was on the menu, despite it being a restaurant that we've been to for a while, so we went for the ol' favourites, namely:

It was when my parents and sister asked about seeing the same menu on their phones whilst out and about, along with one or two others that I decided to look for our local takeaway menus online, but to find nothing.

A simple web-page later and a couple of simple links added for maximum effect, and the menus were available for us to use.

And since then, and much to my wife's delight, I've been gathering menus and piling them up, from where-ever we've been away.

Later, it tickled my brain enough to all-out on it, and ended up making the behemoth that is The Menu Pile as you see it today.

Email ThisBlogThis!Share to TwitterShare to FacebookShare to Pinterest
Labels: History

The Menu Pile website (https://www.themenupile.co.uk) was developed almost by accident, and has since been used almost a thousand times by people in and around Cambridgeshire so far, as this is the starting point of it all.

I wanted to create a blog to try and explain some of the rationale behind it all, as to why various elements of the website happened.

If there’s anything that you’d like to comment on, or email me about, please do and I’ll gladly respond as best as I can.

Brett Rigby
Brett Rigby is a life-long geek, loving the use of technology in the workplace and at home, and even in the car. Disclaimer: The opinions expressed herein are my own personal opinions and do not represent my employer's view in any way.